This time of year, roasted vegetables are a mainstay on our weekly meal plans. They’re warm, grounding, comforting, and super easy! Just toss ’em in oil (we like avocado oil for roasting because of its higher smoke point) and throw them on a sheet pan. It doesn’t get much easier than that! But if you’re getting sick of regular ol’ potatoes and carrots, change up your routine with these not-so-average root veggies!

Celery root. Celery root, or celeriac, doesn’t have the most appealing name IMO, but don’t let that fool you! Celery root is a great way to change up your root veggie game. First, it’s high in vitamins K and C. It’s also a good source of fiber and is lower in carbohydrates than other root vegetables. Use it instead of potatoes in your recipes – think creamy celery root soup or sub it in a mashed potato recipe! Check out this yummy Roasted Celery Root with Walnuts and Thyme recipe!

Rutabaga. Rutabagas actually have a ton of vitamin C. They support the immune system, which is especially important this time of year with both flu and Covid-19 lurking. One cup of rutabaga provides nearly half the recommended dietary allowance of vitamin C for women. Rutabagas also contain magnesium and calcium, which contribute to better bone health. Not only that, they are a good source of potassium, fiber, and antioxidants. Boil ’em, mash ’em…or roast em! Try this Mashed Rutabaga with Sour Cream and Dill recipe!

Jicama. Some people describe the taste of jicama as a savory apple and it looks like a giant turnip. Jicama is a good source of fiber and vitamin C and is low on the glycemic index. Jicama is super versatile, too – it can be a great substitute for raw carrot and it can also be made into chips and fries!

Add jicama to your next veggie platter or make a Mexican-inspired fruit salad with jicama, Tajin, and lime!

Sunchoke. Sunchokes are tubular root vegetables sometimes called Jerusalem artichokes, which is confusing. What are they? Artichokes? Potatoes? Why do they look like ginger root? Well, to clear up the confusion, sunchokes are nothing like an artichoke. They have an earthy, slightly nutty taste and are similar in texture to a potato. Sunchokes are a great source of potassium, iron, and fiber, including inulin. Inulin is a helpful prebiotic that enhances digestive and immune health. Like other root vegetables, sunchokes can be prepared in lots of different ways. Try them roasted with rosemary and garlic or as a sunchoke puree!

Taro root. This root veggie has a fun purple hue and packs in tons of nutrients. It’s probably most comparable to a sweet potato or yam because of its slightly sweet taste. It has a considerable amount of manganese, vitamin B6, vitamin E, and potassium. Taro root also has fiber and starch, which are good for digestive health, as well as polyphenols and antioxidants. Try taro root chips or arbi ki sabji, an Indian dish with curry and taro root. Plot twist: taro root can also be used in desserts!

Daikon. Daikon is a type of radish that is common in many Asian cuisines. It has a mildly sweet taste with a hint of spice, though that varies depending on the variety. Daikon is low in calories and has many nutrients, including vitamin C and folate. Try this Chinese Braised Daikon Radish recipe or use daikon to switch up any radish dish! 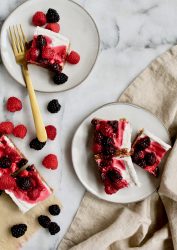 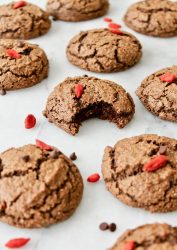 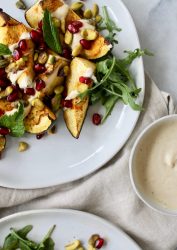 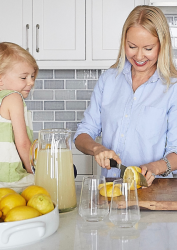 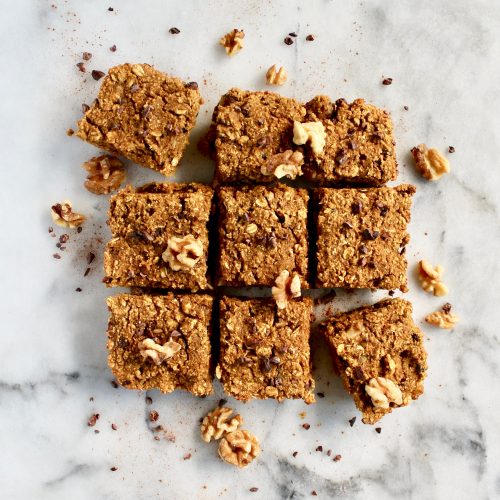 These bars are everything you want from a fall breakfast item – they’re grab-and-go, pumpkin-spicey, cozy, healthy, and delicious! What more could you ask for?

As with most Trader Joe’s items, not all autumnal-flavored treats are created equal. We’ve broken down some of this year’s fall foods to help you skip the sugary, processed, downright spooky “tricks” and choose healthy(er) “treats” instead. 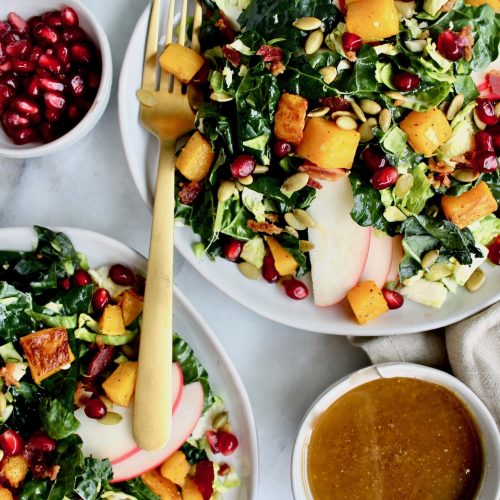 This Butternut Squash Kale Salad with Maple Bacon Vinaigrette is the perfect fall salad – it’s full of clolor and flavor and shines on a Thanksgiving dinner table!